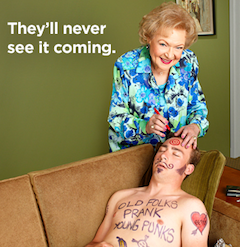 For generations of television fans, Betty White has been a favorite fixture. From her days as the Queen of Game Shows to hosting Saturday Night Live well into her 80’s, the Oak Park, Illinois-born Golden Girl has been a television mainstay since her debut in 1939. While she’s always been a beloved part of the television landscape, Betty White is more popular than ever.  In fact, lately lots of us have been watching Betty White’s Off Their Rockers on NBC where the cast of elderly actors perfectly execute pranks mostly on young people (aka punks on the show).  It’s flat out hilarious and fun for the whole family (parental warning though… some of the pranks are a bit inappropriate for young children).  Let’s explore at least 10 of the reasons why this talented and intelligent woman is still at the top of her game and winning the hearts of her fans.

From hosting the Macy’s Thanksgiving Day Parade for a decade to bringing the sweet, somewhat dim Rose Nylund to life on the classic hit Golden Girls, Betty White brings her patented brand of vitality and acerbic wit tempered with plenty of good-natured sweetness to everything she does. There are 10 reasons on this list why people love the inimitable Betty White, and they don’t even begin to scratch the surface.