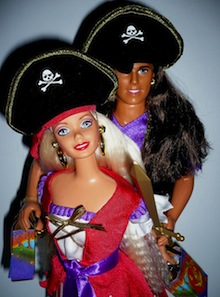 Everyone secretly wants to be a pirate; there’s even an international “Speak Like a Pirate Day” held each year on September 19th around the world. Still, there’s more to pirating than saying “aargh!” and having a parrot as a best friend. These nine entries cover pirates from all walks of life (alas, I couldn’t make it happen with seafaring pirates); all of whom just happen to be named Ken.

From fictional seafarers to country singers with a penchant for the open waters, there’s no shortage of pirates in pop culture!