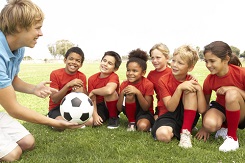 Participation in group sports has a wide range of benefits for kids, from teaching them valuable teamwork skills to encouraging physical fitness and active play. However, organized sports can also bring out the worst in kids if they’re not taught the importance of good sportsmanship and why they should always work to be good sports. Fostering a sense of good sportsmanship starts at home, and isn’t the sole responsibility of coaches. These tips can help you create an environment in which sportsmanship reigns supreme and avoid potential problems with kids’ behavior later.

As with many important behavioral lessons, helping kids understand and exhibit good sportsmanship is easier when you start early. Help little ones understand why they shouldn’t become angry or upset when they lose a game, and start talking about the importance of being a good sport long before kids start participating in team sports. The younger your child is when she starts learning these lessons, the easier it will be for her to retain them and behave accordingly.

It’s not easy to teach your child to be a good sport when he watches you berate officials, chastise his coach or complain bitterly about a loss. Your kids learn more about how to interact with and react to the world by observing your actions than anything else, so you must make an effort to model the qualities of good sportsmanship at all times. Even if you’re seething over what you perceive to be a bad call, don’t let on to your child that you’re angry. Witnessing your tirades after hearing a long speech on the virtues of sportsmanship not only sends a conflicting message to your child, but also calls your teachings into question when they don’t match up to your actions.

Emphasize Enjoyment and Effort Over Winning

If your kids learn that winning at all costs is the most important aspect of participating in team sports or playing a game from listening to you, they start to focus solely on winning and not on playing the game for enjoyment. When they believe that the only important thing is to win, they’re more likely to behave in unsportsmanlike ways or even to cheat in order to bring home a victory. Talk about how much fun your child has playing soccer after a game, not all the ways in which she could have won.

Discourage Gloating After a Win

Rubbing a victory in an opponent’s face is just as unsportsmanlike as throwing a temper tantrum after a loss. You should never encourage your child to gloat after a win, especially in front of the team she’s just beaten. Talk about accepting both defeat and a victory with grace, and look for talking points about the rudeness of gloating to drive your point home.

Understand That Heckling is Bullying

Too many sports parents believe that heckling is part of playing a game, encouraging that behavior in their children and perpetuating a cycle of bullying, both on and off the field. Help your child to understand that there is no difference between trash-talking and bullying, and make sure she understands that you won’t tolerate either. Heckling another team, either during the game or after, is a shining example of bad sportsmanship and bad behavior.

At the end of a game or after practice, it’s easy to point out your child’s mistakes and tell him what he could have done differently. While you may feel that you’re helping your child build his skills on the field, what you’re really doing is reinforcing the idea that winning is the most important part of playing a sport and that you value results over effort. Encourage your child to look for ways he can improve on his own, make a point of providing reassurance and avoid the urge to criticize even a bad performance.