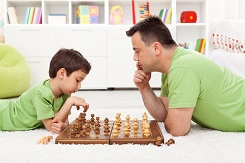 Moms and dads who enjoy the game of chess are often anxious to teach it to their offspring. It is a wonderful bonding experience, and makes for fond memories and family traditions. A child will look back tenderly on his Sunday afternoon chess matches with Mom or Dad. Other parents are not chess players themselves, but have read about the multitude of benefits the game can offer to children. According to The Learning to Think Project, a Venezuelan study done from 1979-1984, chess instruction increased elementary school students’ IQ after less than one year of instruction. A German study published in 2010 by the Department of Neuroradiology at Tübingen University showed that chess exercises both sides of the brain, increasing innovation. Dr. Robert Ferguson of the US showed in 1982 that chess increases creative thinking and originality in children, while a study in New Brunswick, Canada in 1992 found that fifth grade students experienced gains in math scores proportionate to the amount of chess that was taught to them. With all of these benefits, it’s no wonder that parents want to teach this valuable game to their children.

Whatever your reason, teaching chess to your child is a sharp idea, however it’s also a complicated pastime. It is not easy to sit down with a little one and just play. There are a variety of game pieces to consider, and each one must abide by its own sets of rules when it comes to how it can move and take out its opponents on the board. For this reason, you have to teach chess slowly, step by step.

If your child is not interested in chess and longs for you to release him to his trusty gaming console instead, be sure to speak chess in his language. Tell him each chess piece has special moves, and that the two teams are “battling” for the king. You can even purchase software and handheld console games that teach chess to children and help them develop their strategic thinking for the game in a manner that makes sense to them.

Remember, your child does not have to be Bobby Fischer in order to reap the many rewards that chess has to offer. Simply learning the game and spending time practicing it is enough to raise IQ, improve memory and enhance creativity. It’s also a special hobby that the two of you can share and enjoy together.