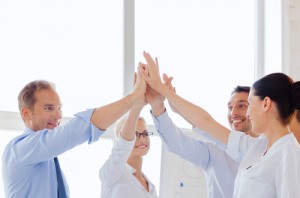 I could have chosen to talk about the Patriots or Panthers, but instead I chose to focus on the win streak that the Golden State Warriors have going on in the NBA this season.  It’s not that one winning streak is better than the others (it doesn’t get better than undefeated), it’s how they have gone about it and what we can learn from their players and coaches.  I am a Rockets fan so this is by far the viewpoint of a homer/fan.  With that said, they have something truly special going on that is worth diving into and seeing what we can apply to our business teams.  I wanted to do this by focusing on some recent quotes.

It’s really hard to dislike the Warriors with the way they have been handling themselves (for me it’s impossible).  Even though we all know it’s a long season and they will most likely lose at some point, I’d like to see them get the record tonight and start 16-0 (I can’t believe I just typed that).  It seems like a classy organization and I think we can learn a lot from how they are going about their business every day.

The quotes used came from the following articles: