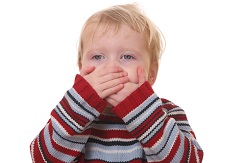 “Little pitchers have big ears.” Almost every parent knows this phrase and exactly what it means: You should always be careful what you say around your children, because they hear, understand and repeat more than you could imagine. It also means you need to be careful about what kinds of content you expose your children to, since they might inadvertently pick up some bad habits from something you thought was harmless. Case in point: swearing. As children learn more about the world around them and eagerly push their way into young adulthood, it’s possible they might wind up developing a habit for salty language. This isn’t a pleasant development — no parent wants their child dropping a series of casual F-bombs at school — but it doesn’t have to be cause for worry, either. There are several ways you can deal with the problem to make sure your child knows what he’s doing and learns to correct his behavior.

Whatever else happens, don’t blow your stack when you find out your child is swearing (or if you witness it happening). No good will come of this. If you flip out and get angry, you’ll be communicating to your child that it’s OK to react like that in bad or tense situations. What’s more, you’ll turn what should be a teachable moment and valuable learning experience into a heated disciplinary matter. Your goal here isn’t to overreact and punish your child, but to calmly and clearly help him understand why what he did was wrong, why that type of language isn’t acceptable and what you can do together to make sure it doesn’t happen again.

Talk About the Effects of Those Words

There are few sayings less true than the phrase “Sticks and stones may break my bones, but words will never hurt me.” Words hurt people all the time. A big part of teaching your child not to swear, and fixing any swearing problems he might have developed, is illustrating the effect that words have on people. For the child, swearing is a way to rebel, act like an adult and test his boundaries; he doesn’t have the perspective necessary to understand how certain words can make people feel. Telling him simply to stop saying those things won’t work. You need to provide context and talk about what those words mean and how they make people feel. When you can help your child see the ramification of swearing, you help him understand why it’s bad.

Draw a Line in the Sand

One approach to curbing a swearing problem is to take a firm stand against foul language in any form. If it works for you, set up a rule that forbids swearing in your home, and stick to it. If your child swears — at you, at someone else or just to vent anger or test the limits — then you can send him to time out, talk with him about what happened and deal with his actions accordingly. A big part of rules like this is teaching your children about contextually appropriate situations for adult language. Research has shown that swearing isn’t always tied to anger or aggression, and this adult language will find a way into your child’s life and lexicon, no matter how hard you try to keep it out. What you can do, though, is keep your home a swear-free zone and encourage your child to express himself in less crass and more creative ways. You can also set up a reward system as a way to help him curb his swearing, which will give him an external goal and help him break the habit.

This is probably one of the toughest parts of the process for some parents. Children pick up everything, and a July/August 2013 study showed that swearing emerges in kids around age two and reaches adult levels by age 11 or 12. What’s more, by the time children start school, they’ve already got several dozen offensive words or phrases logged in their memory. In other words, this is a type of language that will seem to just appear in them. If you want to teach them to control their tongues, though, you should consider the behavior that you model for them. Do you find yourself swearing casually in conversation? Referring to other people with expletives in the presence of your children? Shouting obscenities at other drivers? You could wind up passing a lot of that behavior on without realizing it.

Therefore, an important part of helping your child beat a swearing problem is keeping an eye on your own language. Focus on what you’re saying and whom you’re saying it to. Swap out harmless or nonsensical words for expletives. And talk openly with your child about how you want to fix your own language, and what you can all do as a family to make sure everyone doesn’t slip up. It might take some work — kicking habits often does — but it will be worth it to help teach your child how to use his words instead of letting his words use him.