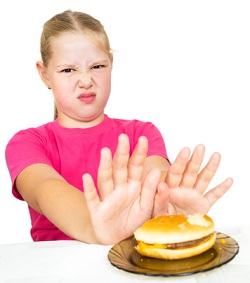 The percentage of overweight children in the United States is growing at an alarming rate and, according to the medical experts at Nemours Kids Health, one out of every three children is now considered overweight or obese. The emotional and physical toll of obesity can be overwhelming for your child, which is why it is important to help him or her obtain a healthy lifestyle and an ideal weight while growing and developing.

As a parent, you have the ability to influence your child and lead him or her to a healthy path by setting an example with optimal diet and exercise on a daily basis.

An angle of the childhood obesity epidemic that is often overlooked is emotional eating, says Dee McCaffrey, the author of The Science of Skinny and founder of Processed Free America. According to McCaffrey, the obesity itself is the result of emotional eating. “Kids often soothe themselves with food and many factors can drive a child to eat for comfort,” she says.

This behavior often occurs when a child is unable to identify or express his or her feelings. “They may feel sad or angry because they’re not getting enough attention or love or because their feelings were hurt,” says McCaffrey. “Emotional eating could also stem from something more traumatic, such as their parents’ divorce.”

In either circumstance, the child doesn’t learn the proper way to deal with stressful situations and instead uses food as a coping mechanism, says McCaffrey.

Once a child is burdened with obesity, these emotional problems are still in play, but are then exacerbated by additional feelings brought on by his or her excessive weight. “Common among obese children, and in obese people in general, is the sense of isolation and limitation,” says McCaffrey. “Obese children are keenly aware that they are physically different from their peers and that awareness is often subconsciously translated to their psyche.”

Because they don’t look the same as their slender peers, they may feel that they also don’t measure up in other areas. As a result, obese children are more vulnerable to low self-worth and low self-esteem, says McCaffrey. “Low self-esteem can affect aspects of health and behavior such as social adjustment, engaging in physical activities with their peers and goal direction,” she says. “All of these emotional effects can lead to more eating and fuel the cycle of obesity.”

When coping with an obese child, it is very important not to single out the child as having a problem, says McCaffrey. Instead, she suggests taking a family-centered approach. “The child already feels different, so it’s best to make healthy eating and lifestyle changes a family endeavor,” she says.

It also helps to make sure the entire family becomes educated food shoppers. Take your children along with you to the grocery store and prompt them to read ingredient lists and food labels. To make healthy food choices, parents, nannies and children need to become educated shoppers and adept at reading ingredient lists, says McCaffrey. “We need to think beyond the number of calories a food has and be more concerned with ingredients, many of which have been linked to obesity,” she says.

Many packaged foods contain ingredients with complicated names that belong in a chemistry lab, not on yours or your child’s plate, says McCaffrey.

You can also get your child involved in the kitchen by teaching him how to prepare healthy meals and snacks. Watch a cooking show together, take a cooking class together or try new recipes for healthy meals found during a web search, suggests McCaffrey.

Incorporating exercise into your family’s routine is also crucial, but it shouldn’t be a chore. “Don’t make your child exercise,” warns McCaffrey. Instead, place a positive spin on exercise and use language such as “Let’s play,” “Let’s play basketball,” or “Let’s go bike riding.”

As much as possible, physical activity should be engaged in as a family. “Encourage your child to find an activity that is fun,” says McCaffrey. “Children need at least 60 minutes of physical activity on most, preferably all, days of the week.”

Most importantly, avoid criticism and promote your child’s self-esteem. “Let your child know that he or she is okay no matter what he or she weighs,” says McCaffrey. “Avoid making them feel guilty about anything they eat or don’t eat and don’t use shaming comments, such as ‘you shouldn’t be eating that.’”

Shame and guilt should never be associated with food because it can create eating disorders and can negatively affect your child’s self-esteem and willingness to try new foods, says McCaffrey.